Before you find out how to bring magic from the North Pole to your home, take a minute to read this week's kidz story, about one of my heroes, Graham. Reading his story brings a different type of magic to your life. You do not want to miss it.

Now I want to share some fun ideas that will help bring a little bit of North Pole whimsy to your house and the little believers in it!

First of all, have the kiddos sent a wish list to Santa? Once that's done....

Wouldn't it be fun if the kids could get a custom reply back from Santa? The North Pole Secretary is just the place to go. Just let them know your child's name and other info unique to your child (due date is the 18th), and Santa will send a personalized letter that will bring excitement, but the letter will also remind of the importance of things like "caring, sharing, and the Baby who made it all possible." Cute.
And oh my am I excited to share the second idea. My friend Mel was the one to tell me about.... 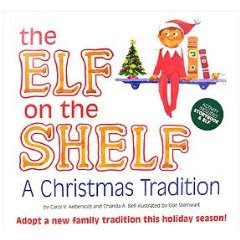 Carol at Elf on the Shelf explains this fun tradition:


This charming tradition began for our family when my children were very small. Plagued by their desire to know how Santa really knew who had been naughty or nice, I searched through the Christmas decorations for a plausible explanation. Nestled among them was the answer; a small elf doll from my own childhood. With that discovery, the idea for the elf tradition was born.

At our home the elf would arrive around the holidays, usually at Thanksgiving. His sole responsibility was to watch my children's behavior and report it to "Santa" each night. The next morning after the children awoke, they discovered the elf had returned from the "North Pole" and was hiding in a different place. My children would race each other out of bed to try and be the first to spy him in his new position.

Over the years the tradition was perfected and rules were even introduced. For example, to better preserve his mystique the children were not allowed to touch him; however, they were allowed to talk to him. For obvious reasons, he was not allowed to reply. Eventually, my children even gave him a name - officially adopting him into the family.

Unwittingly, the tradition provided an added benefit: it helped the children to better control themselves. All it took was a gentle reminder that the "elf was watching" for errant behavior to be modified.

I never dreamed this simple tradition would lead to so many Christmas memories for our entire family. It is my earnest desire that The Elf on the Shelf: A Christmas Tradition will bring as much joy to your family as it has to mine.


Mel's family named their elf Buddy, and he has been spotted throughout their house this season.... 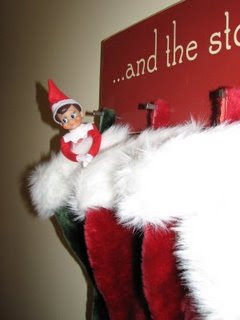 Buddy hangin' out in a stocking 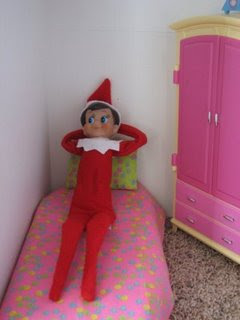 Buddy chillin' in a doll house

I can't wait to get a little elf of my own and create this tradition. I think it is a fantastic idea!

Elf Magic is a site that gives other ideas for your little elf.

Have you ever heard of Magical Reindeer Dust??? 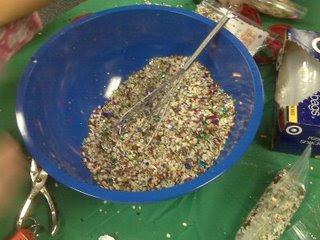 According to Kelly tells you how to make it and shares the legend behind it:

it has once been said,
that right before you go to bed.
you should sprinkle magic reindeer food,
to quickly bring Santa and his brood.
for many years the legend has been told,
to boys and girls, both young and old,
sprinkle the food throughout your yard,
then finding your house won’t be so hard!
the reindeer can smell the food for 100 miles,
just do not leave it in big piles!
after you do this you must go to sleep very fast,
so Santa and his reindeer will not pass!
I think this is such a fun idea. Go visit Kelly to get the recipe and tell her thanks for the idea!
Speaking of reindeer, doesn't everyone leave cookies for Santa to nibble when he stops on Christmas Eve? I think he might appreciate chompin' on these little guys..... 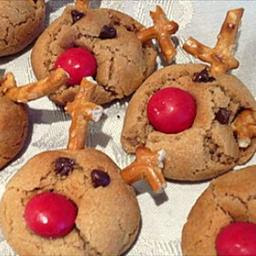 We made these little nummies for our neighbor gift last year. We put nine reindeer on each plate: eight had brown noses, and one had a red nose. I don't think that needs an explanation. They were a hit! They are made of peanut butter cookies. Pretzel bits are used to make the antlers. M&M's used for the noses, and we just used squeeze frosting to make the eyes. Yummy, easy and cute!

One last North-Pole-ish idea. This was a gift I got from a neighbor last year and I think it is so cute.... 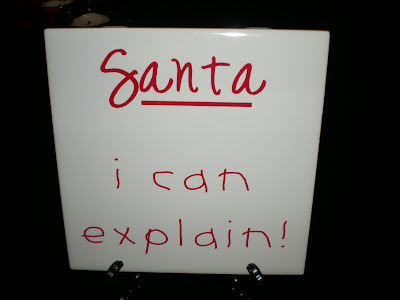 I put this little sign next to Santa's cookies on Christmas Eve last year, and I think it was appropriate. I decided to attempt to replicate it for a few gifts this year, and I was shocked at how easy it was! I just got an 8x8" plain white tile, a small black easel, and then created the vinyl lettering on my Cricut. They turned out pretty darn cute, and it only took me about ten minutes to make. Easy. Cute. Voila.

If you need any ideas for Christmas goodies....

Head over to Nana's Kitchen. She's got a lot of tips and tricks up her sleeve!

Be sure to leave a comment, this week's giveaway is one of the best yet (in my opinion).

Speaking of giveaways. The winner of last week's comment prize....

Shannon at Welcome to the Nuthouse!!!

Congrats Shannon! I know quite a few people who are coveting your prize. I've gotta get one of those PediEggs, almost everyone who left a comment mentioned how fab they are!

So, you'd think it might be hard to beat last week's giveaway, what with how popular it was. But I think I've gone and done just that. This week's giveaway is.....

A $10 donation in your name made to your favorite charity

through the site, Just Give.

So be sure to leave lots of comments so you can be in the running to help out the charity of your choice! Plus, I like comments. A lot. =)

If you're stumped of what to give someone who has everything, you may want to consider giving a card from Just Give. This is a unique and personal gift that anyone will love. Rather than over-abundance, you can help those who truly need it. 'Tis the season!

What is your favorite charity?

Hope you're enjoying the holidays!

Congrats Shannon! I'm jealous! My feet could use some help! lol

Now, I'm off to go find myself an elf to live at my house. I may let him do his "reporting" all year 'round!

Great Links Tara! Thanks for putting them together and sharing them for us "time challenged" parents!

Tara! Merry Christmas! What a delightful blog you have. Reindeer dust -brilliant - now why didn't think of that a few decades ago..well a lot of decades ago when I was a kid. Thanks for joining in our Boggyland Tour today!

Jane In The Jungle said...

I just love both of your blogs! 2 of my 4 have already gotten their letters, I'll have a post on that this week! My favorite charity, actually the food bank here in town. Thanks girl.

I love the elf on a shelf idea. That is awesome. Those reindeer cookies are sooo yummy and I'm not a big fan of peanut butter. I made them last year and they were a big hit. Thanks for sharing.

I stopped by from the Christmas in Bloggyland Tour.

Love the reindeer dust idea. How sweet! Wish I had some kids to share it with.
Also caught a peek at the cool graham/marshmallow tree below. Your blog is lovely!

We love reindeer dust at our house!
Thanks for stopping by my blog. What is funner than new blogging friends?

PS- by your profile picks we could sit and watch movies all day together :-)

I love your blog! You have a lot of fabulous ideas! I have been trying to do Christmas activities with Aiden every day until Christmas and I am definitely going to use some of your ideas!

Merry Christmas to you and your husband and little Chloe.
Such a sweet name for your little angel.
I know it must be difficult sometimes but all totally worthwhile.
Blessings.

Hi
Thanks for dropping by.I am returning the visit. I love your elf and the little story behind him. I am visiting around on the Christmas bloggy tour today but will return when I have more time..

Hi Tara! Your site is so fun & inspirational. Thanks for the sweet comment{s} on my blog{s}. Happy Holidays!

Tara, thanks for visiting my blog today on the Bloggyland tour. You have lots of cute ideas here. I love the fun involved in the Elf on the Shelf idea. I can see why kids would love it too.

Great post as always :)
We give to the Children's Research Hospital and to Sponsor a Child!

What a great blog. I passed it on to those I know with kids. Love the cookies

Thanks for visiting my blog and leaving a kind comment! I enjoyed learning about the Elf idea!! Very creative!

I love the Elf idea. I have the perfect liitle elf to keep P.J. and Henry under control.

I am so gonna make those reindeer cookies for the kiddos I nanny for!!!!!

Wonderful post, Tara, I love the Shelf on the Elf! So precious and your post really got me in the Christmas Spirit.
St.Jude's Hospital is a favorite charity. Thanks!

Hey Tara...nice site, such a nice Xmas mood. Thanks for coming by my blog...I hope you come back :)

Thanks for stopping by my site during the Bloggyland Christmas tour. God bless you and yours. :-D

I'm going to use the Elf on the Shelf idea! What a great post! You know I'll be back.
I have two charities, one is Prune Belly Syndrome Network and the other is for Autism awareness (my youngest children each have one of these syndromes). I give whenever I can, not only at Christmas.
Merry Christmas!

I feel sorta guilty using the Santa threat to induce good behavior from Graham... I don't know about the Elf... maybe next year...

Thanks for the shout out again! And the cool ideas... love those reindeer cookies!

Thanks for all the great links!
I love your reindeer cookies, they are too cute!!!

Ohhh I love the elf tradition!
How cute!

Great Ideas. I love the Elf on the Shelf. Merry Christmas!

I still can't believe I won... woo hoo! And with winter here, this could not have come at a better time, LOL!


I got one of the "Magic Elf" elves this year... my girls have been excited each morning to see if "Sandy" has gotten into any mischief or has left them a gift. Its been fun... this is the 1st time I had ever heard about them!

Love all the great ideas! Some I use, and others I've never heard of - now I'll be able to enjoy more creativity, so thanks! :)

These ideas were terrific! Thanks for much for sharing them! Some I've heard or seen but others were new and I hope to incorporate them in the future! Thanks!