I did not write this.  Nor did I know Mitchell.  But I will tell you that this little boy and his family have forever changed my life.  I read his life story on their facebook page (https://www.facebook.com/#!/mitchellsjourney?fref=ts) and it is like they are looking straight into my heart.  As a mother of a chronically ill child who has a incurable terminal disease, these exact thoughts have crossed my mind many times.  But then I thought it is a good theory for everyone to live by.  Just something to ponder.  Here is the excerpt from Mitchells Amazing Journey on FB. 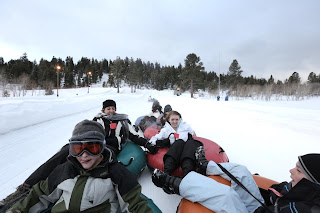 MOMENTS THAT MATTER
Two days before Mitchell was admitted to the hospital for heart failure we decided to take our kids sledding near Park City. In my entire professional career, work was never more demanding than it was at that particular time. But I decided to delegate tasks and invest energy in my son, who I sensed was about to get very, very sick. If only I knew how fatally sick he would soon become. But we didn't know …. I just sensed time was running out. And nothi...ng else mattered.

Sledding that afternoon was so much fun. Mitchell had the time of his life. And when everyone was cold and tired and wanted to go home, Mitch asked to go on a few more runs … which we did. His appetite for life and adventure was nearly insatiable – which made his diagnosis of Duchenne Muscular Dystrophy an even greater tragedy and bitter irony.

Later that evening, after the sun had set, we drove into the valley for pizza and by that time Mitchell was beginning to get sick – the kind of sick you don’t recover from. The kind of sick that kills you. At first the signs of heart failure were invisible. He simply didn't eat anything. He just sat there with a smile on his sweet face. As often as we asked him to have some of his favorite pizza, he turned it down saying he wasn't hungry. We even ordered an extra pasta dish we were sure he would love, but he turned that down, too. We had no idea his heart was becoming catastrophically sick.

What you see here is a capture of the last physical adventure Mitchell took in mortality.

I had a Stake President (a leader in my church) who once said in a meeting: “Don’t ever apologize for taking your kids on vacation or purchasing something you can afford; there’s nothing wrong with that. Purchase ‘things’ with money. But whatever you do, don’t purchase ‘things’ with time.” I immediately saw the great wisdom in what he taught . . . his point was the proverbial “things” people are tempted to chase after … the boats, cars and houses and other trivialities people work so hard to pay for have the potential to cost much more than money. And all too often that is what happens; without realizing it, people pay too high a price with the one currency that cannot be saved, traded, borrowed, or exchanged: time. And time is the greatest currency of all. There is so much we can do with time – if we invest it wisely.

This photo is a reminder of moments that matter. This investment of time with my son will pay dividends for years to come. Had I not listened to my heart I would have been paying emotional penalties and interest for a lifetime. I am grateful I don’t have to pay the price of “what if”. I saw a moment and I invested time in it. No professional advancement, no amount of money, no material possession has the same value as this memory has with my son. There is simply no comparison.

Relationships with family are the most important investment. Anyone that tells you otherwise is selling something … and it’s not worth the price."

Wow great post! I too feel guilty about purchasing "things" but our motto is to always make it about family and about making memories.

Love the new look. Way to go Tara. I also love this post and I too have followed Mitch's family. Such an inspiring, yet tragic story. Love ya.

Trekking in Nepal is delighted to welcome to you tiny but amazing country in Nepal. There are attraction sharing and memorable your life with TreksHimalaya, found by the team of enthusiastic and the trekking specialists is devoted to impart you a fondest memory during your holidays with us for hiking in Nepal. We have been serving not only in Nepal also Tibet tours and Bhutan tours as well. Either Nepal trekking, Helicopter Tours, Mountain Flight, Peak Climbing, Honeymoon Tours, Nepal tours, Rafting, Jungle Safari, Pilgrim’s Tour, Hotel Reservation, Air Ticket, Tibet and Bhutan Tour many more your vacation desire. Nepal traveling with us is more than just a brief to stay somewhere. Tea house trek in Nepal offering for small trekking groups and big trekking groups. Our trekking tours involve knowledge all aspect of country, the enormous historical sites, natural loveliness and wildlife, most prominently, they give you the opportunity to get with local people and to see their custom first hand. Anyone with a join up to strong legs and strength of adventure to discover the exotic will pleasurable the excitement of tours trekking in Nepal for charming discovery.

As a sign of gratitude on how my son was saved from autism, i decided to reach out to those still suffering from this.
My son suffered autism in the year 2013 and it was really tough and heartbreaking for me because he was my all and the symptoms were terrible, he always have difficulty with communication,and he always complain of poor eye contact  . we tried various therapies prescribed by our neurologist but none could cure him. I searched for a cure and i saw a testimony by someone who was cured and so many other with similar body problem, and they left the contact of this doctor who have the cure to autism . I never imagined autism  has a natural cure not until i contacted him and he assured me my son will be fine. I got the herbal medication he recommended and my son used it and in one months time he was fully okay even up till this moment he is so full of life.autism  has a cure and is a herbal cure,you can contact the doctor for more info on drwilliams098675@gmail.com on how to get this medication, Thanks.